Two books by Lanre Akinsiku, a recent graduate of the Department of English’s MFA program in fiction and currently a lecturer in English, earned top nods from the New York Public Library on its annual list of the best children’s and young adult literature.

“Justin” and “Janae,” titles in Akinsiku’s “Blacktop” series, were selected by the library for its list of the top books of 2016. They were also honored as Junior Library Guild selections.

Penguin editors approached Akinsiku while he was still a graduate student, asking him to write the series, which includes four books and focuses on teens who meet on the public courts of Oakland, Calif. and come together to form an improbably competitive basketball team.

“There’s such a dearth of stories about kids of color getting to be human and alive in their own world. I know growing up I didn’t see a lot of those stories,” said Akinsiku, who grew up in Oakland, the child of Nigerian immigrants. “Basketball is the frame, the way all of their stories intersect, but the books are mainly about the excitement, anxiety and strangeness that come with growing up.”

The last two books in the series, “Frank“ and “Toni,” also engage present-day issues Akinsiku wanted to explore – the relationships between police and teens of color and the impacts of gentrification on a community.

“I didn’t want to be too deterministic and I knew that I didn’t have to write the book focused on racism,” he said. ”But because of who I am and where I come from and the fact that I’m making these characters come alive in a world that I know, I knew they were personally struggling with these issues, and I wanted their stories to include that.”

Akinsiku had just finished his first year in Cornell’s writing program when he received accolades for a 2014 piece, “The Price of Blackness,” which appeared on the website Gawker after the shooting of Michael Brown in Ferguson, Mo.

“This is probably a good time to backtrack a little and talk about fear,” Akinsiku wrote in that piece. “To be black and interact with the police is a scary thing. The fear doesn't have to come from any kind of historical antagonism, which, trust me, would be enough; it can also come from many data points of personal experience, collected over time. Almost all black men have these close-call-style stories, and we collect and mostly keep them to ourselves until one of us is killed.”

Akinsiku, who writes under the name L J Alonge, is the first student in the history of Cornell’s creative writing MFA program who will have published three books before he leaves at the end of this academic year, according to Stephanie Vaughn, professor of English and one of Akinsiku’s mentors.

“His writing contains the kind of detail and surprise that makes it irresistible to turn the page,” Vaughn said.

To illustrate her point, Vaughn quoted the opening of “Janae:” “Basketball chooses you. It’s just one of life’s mysteries—like the existence of yawning or gravity….”

“It comes at you so fast that you do not even realize that someone has just called on physics and biology to identify the appeal of a sport,” Vaughn said. “He seems never to have forgotten anything he has read, and he writes with a grace a wit that make his sentences worth re-reading.”

Akinsiku is similarly awed by — and also grateful to —Vaughn, who he says has been pivotal “in terms of reading my work, taking it seriously and taking me seriously as a writer,” he said. “I feel super privileged to work with her as closely as I do.”

The small size of Cornell’s MFA program was also an attraction for Akinsiku.

“You get to really know the people who are giving you feedback on your work,” he said. “Being a part of a community of writers was really important to me because I’d never had that before.”

For his newest book, he’s exploring elements of magical realism, but the ideas are still being worked out in his mind.

“The elements of the world I’m creating are not of this world,” he says of his recent fascination, which is leading him to read more works by George Saunders, Gabriel García Márquez, Octavia Butler and Toni Morrison. 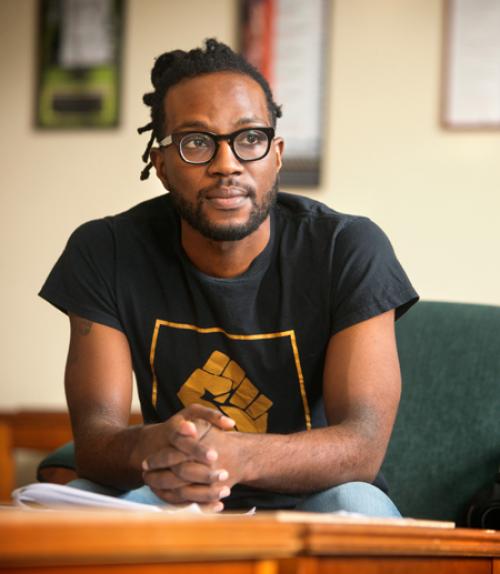