Like many scientists, I want to better understand human behavior. Perhaps one of the greatest challenges we face is explaining why and how we interact with each other.

I believe that by studying the biological basis of behavior in non-human animals, we can uncover the processes that have given rise -- over evolutionary time -- to complex behaviors in ourselves, such as social attachment and attraction.

When I think about the biological basis of love, I of course immediately think about the brain. This collection of nerve cells (or neurons) communicate with one another in networks that determine what we do each and every day, every wakeful and sleeping moment. I also think about the hormones produced by the brain and the endocrine system. These act on neurons and neural circuits to change the activity patterns that contribute to our behavioral and emotional state, determining if we are happy, sad, or angry. Or are we in love?

I use fish as model systems to study the neural and hormonal basis of social behavior. Fish have all the same major parts of the brain as you and I and are quickly becoming a centerpiece of 21st century behavioral neuroscience.

When most people think of non-human sounds, insects, frogs, birds, whales and dolphins typically come to mind. And yet sound production is widespread among fishes and has been known since the time of Aristotle. The species of fish that we study is known as the plainfin midshipman, aka the canary bird fish or California singing fish, which immediately tells you that they make sounds.

Making and hearing sound play central roles in midshipman social and reproductive behaviors. They make several kinds of calls with wonderfully descriptive names such as grunts, growls and hums.  Grunts and growls sound just like the names imply and are used during aggressive encounters. Hums are especially interesting, as males will hum repetitively throughout the night in the late spring and summer. We can call the hums love songs, because they serve as potent stimuli to attract females to spawn in a male’s nest.

For some listeners, the midshipman’s courtship hum reminds us of the droning sounds made by Mongolian throat singers.

Making the correct sound at the right time of year and day is as crucial for social communication and reproductive success for midshipman fish as for many other animals, especially frogs and birds. But what are the neural and hormonal bases for this behavior?

We discovered that a female’s ability to hear all of the frequency components of a male’s hum changes between the breeding and non-breeding seasons. We also found that the hormone estrogen can transform the hearing sensitivity of a female during the winter to that of one during the summer.

The potent influence of estrogen on hearing in midshipman fish during the breeding season is consistent with its influence on reproduction in many animals. So if we think of attraction as one component of love, then our research might cause us to ask:  How is it we might like the sound of someone’s voice, or their smell or what they look like?  How much might hormones or other neurochemicals found in our nervous systems affect what we find to be attractive?  Perhaps the California singing fish will someday give us the answer. 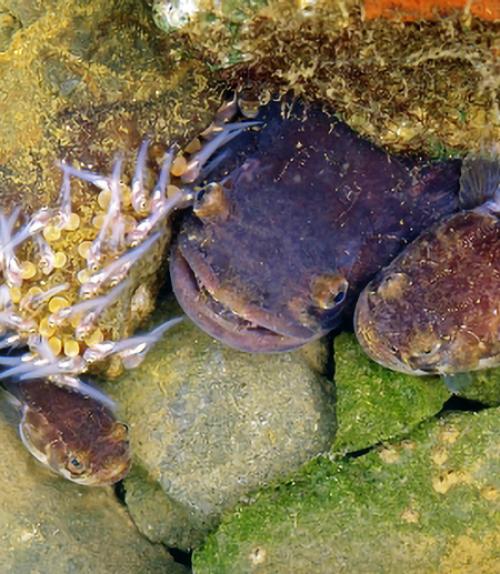