Six Cornell faculty members — including four in the College of Arts & Sciences — have been recognized by the university for excellence in their teaching of undergraduate students and contributions to undergraduate education.

Thomas Cleland, associate professor of psychology, was named a Weiss Junior Fellow, an honor given to recently tenured associate professors for excellence in teaching and notable scholarship. Stuart Davis, senior lecturer in English, and Bruce Monger, senior lecturer in earth and atmospheric sciences, received Weiss Provost’s Teaching Fellowships, presented to nontenure-track faculty who have demonstrated a commitment to extraordinary teaching. These two awards were established in 2016.

The fellowship awards were announced by President Martha E. Pollack Oct. 20 at a meeting of the Cornell University Board of Trustees. The award winners are chosen by a selection committee comprising emeritus faculty, current Weiss fellows and undergraduate students.

“These are among Cornell’s highest honors for outstanding, exemplary teachers,” Pollack said. “The committee reviewed thousands of pages of material and engaged in spirited discussions to identify deserving candidates. I was pleased to accept the selection committee’s choices, and commend their commitment and diligence in putting forward truly outstanding candidates.”

Established in 1992, the Weiss Presidential Fellowship was conceived by the late Stephen H. Weiss ’57, chairman emeritus of the board of trustees, to recognize tenured Cornell faculty members for teaching and mentoring undergraduates. In addition to a respected scholarly career, the recipients have sustained records of effective, inspiring and distinguished teaching and contributions to undergraduate education.

Arias joined the faculty in 1999 and was named a full professor in 2005. He led a team of physics faculty who used physics education research to transform three core physics courses, an effort resulting in students “learning more, better and more deeply than ever before, and enjoying the experience,” the committee noted. He and his colleagues pioneered a flipped classroom model that now reaches hundreds of students every year and has inspired other physics faculty.

His students have given him among the highest ratings in his department for five years in a row and describe him as a fantastic lecturer – clear, well-organized and passionate about teaching. He is known for his ability to explain difficult topics clearly and to teach students how to solve problems methodically and creatively.

“The breadth, depth, creativity, excellence, reach and impact of Professor Arias’ teaching over his 18-year career at Cornell has been extraordinary,” the committee stated.

DiTommaso’s students describe him as a passionate teacher who makes challenging subject matter exciting and engaging, and give him consistently high ratings for his classroom teaching and mentorship. He had a leadership role in creating the agricultural sciences major, which he has overseen for the past 12 years.

He encourages students to become curious and active observers who are, he says, “motivated to seek and learn new ways to discover, problem-solve, collaborate and develop critical thinking.” A productive and respected scholar in weed ecology, he is known for motivating an interest in agricultural science and weed biology even among those who initially had little enthusiasm for the subject.

He has twice been selected by Merrill Presidential Scholars as the professor who made the most significant contribution to their Cornell education, and he received the College of Agriculture and Life Sciences’ Professor of Merit award in 2012 and the Kendall S. Carpenter Memorial Advising Award in 2011.

Feigenson joined Cornell as an assistant professor in 1974 and has earned many awards for his research and teaching. He also directs graduate studies in the field of biophysics and serves on the Cornell Health Careers Program Advisory Board.

Ratings are consistently high for his large biochemistry course, for which he has developed molecular graphics exercises and biochemistry movies. Students describe the course as one of the most organized and thorough at Cornell, and Feigenson is known as a dedicated and caring professor in and outside of class. He has been named by seven Merrill Presidential Scholars as the professor who made the most significant contribution to their education at Cornell.

Cleland teaches a large introductory statistics course, an upper-division graduate seminar and advises 15 students each semester in independent study or honors research. “He has a remarkable ability to enable students at both ends of the quantitative spectrum to flourish, successfully teaching both students who dread mathematics and statistics and those who are quantitatively oriented,” the committee noted.

Students praise his availability, patience, respect and ability to foster an attitude of friendship, collaboration and teamwork. He is a scholar of systems and computational neuroscience, and a substantial number of his peer-reviewed publications have at least one undergraduate as a co-author.

Davis joined the Department of English in 1984 and “has taught brilliantly at Cornell for [more than] 30 years, in both large lecture courses and small seminars,” the committee stated. “He is known for his erudition, scholarship and ability to ask probing questions, and for the skill and care he devotes to helping students become better readers and writers.”

His undergraduate courses have included Shakespeare and the Twentieth Century, Apocalyptic Films and Fictions, and Uncanny Reading, Canny Critical Writing. He mentors graduate student instructors teaching first-year and advanced writing seminars, and has advised more than 200 students at Cornell, including approximately 100 English majors. His Cornell honors include the Robert A. and Donna Paul Award for Excellence in Advising in 2003 and the Clark Distinguished Teaching Award in 1995.

Monger has been teaching at Cornell since 1999, and serves on the Climate Action Advisory Group and the Cornell Undergraduate Research Board. He is best known for Introductory Oceanography, which with more than 1,000 students has grown to have the highest enrollment of any course at Cornell. He also teaches smaller advanced courses.

“In both formats, he is known for being kind-hearted, genuine and able to relate to students from all backgrounds,” the committee noted. “He is generous in giving academic support and career advice to students outside of class, and even in his large course, where it is not possible to know students individually, he is able to personalize the experience by incorporating advice and personal stories.” 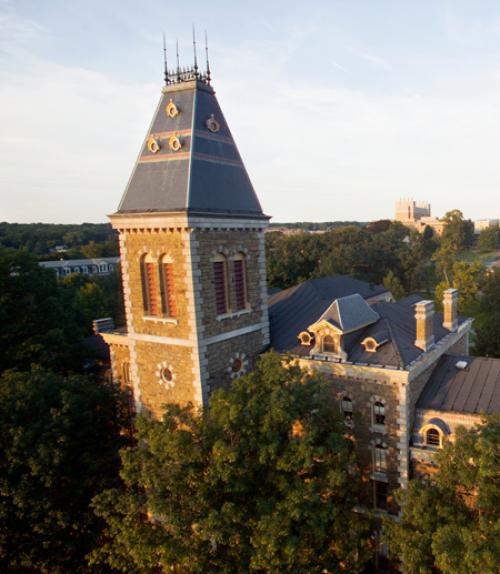