“I was born five days after September 11.”

“I was just a month old when the attacks happened.”

“My mom has told me stories of carrying me around the house while we were watching the news.”

Most of the members of Cornell’s Class of 2023 were infants when the terror attacks of Sept. 11, 2001 occurred. This fall, 20 of them are exploring that time period in a new class, “Introduction to the Humanities: Afterlives of 9-11.”

During the course, a foundational class for the new Humanities Scholars Program, students will read accounts from a variety of perspectives, as they evaluate how that day changed the course of history for the U.S., as well as nations in the Middle East, Africa and South Asia. The class is taught by Durba Ghosh, professor of history and faculty director of the Humanities Scholars Program. 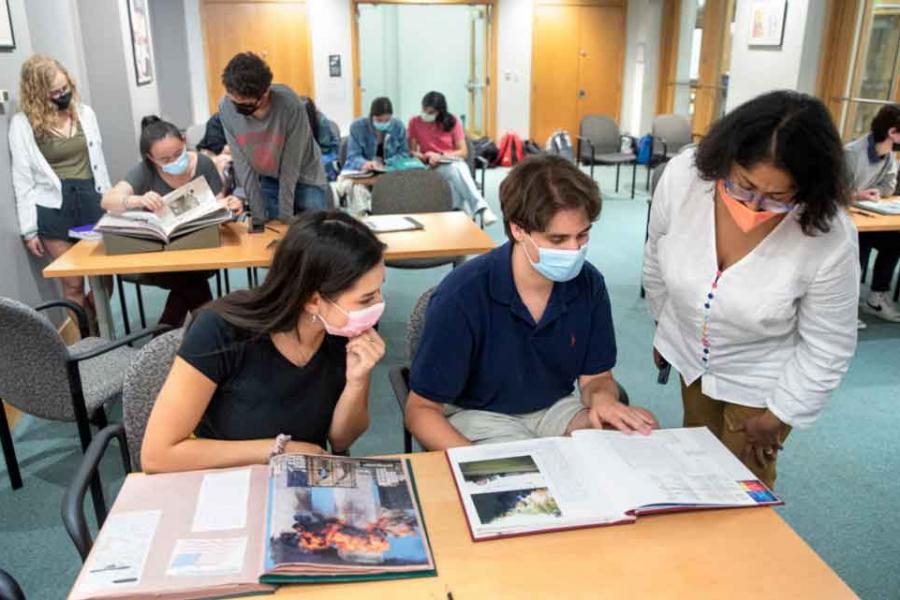 Durba Ghosh and students look through scrapbooks and other information from the 9/11 collections of the Kroch Library.

Class members met Evan Earle ’02, M.S. ’14, the Dr. Peter J. Thaler ’56 Cornell University Archivist, on Sept. 7 to examine scrapbooks from Cornell students who were on campus in 2001. The scrapbooks, part of Cornell University Library’s Division of Rare and Manuscript Collections, were completed as class projects for more than 10 years by students taking a freshman writing seminar on Cornell’s history taught by Carol Kammen. Today, the scrapbooking project continues through an American studies course.

“The scrapbooks are firsthand information that can be used to study what was happening at that time,” said Emma Leynse ’23, one of the students in the “Afterlives” class who is majoring in English, but also studying psychology. “To look at the information in the scrapbooks both from a humanities and a social sciences angle was really interesting.”

The 2001 scrapbooks provide a glimpse into students’ thoughts about the attacks and what was happening on campus. Many include multiple pages of news clippings, photos and memorabilia such as event posters or programs. Other students wrote long reflective pieces wondering how such a tragedy could happen. And still others included stories of frantically trying to reach family members who lived in the city, with old phone bills including line after line of city phone numbers dialed and not answered, pasted on the scrapbook’s pages. 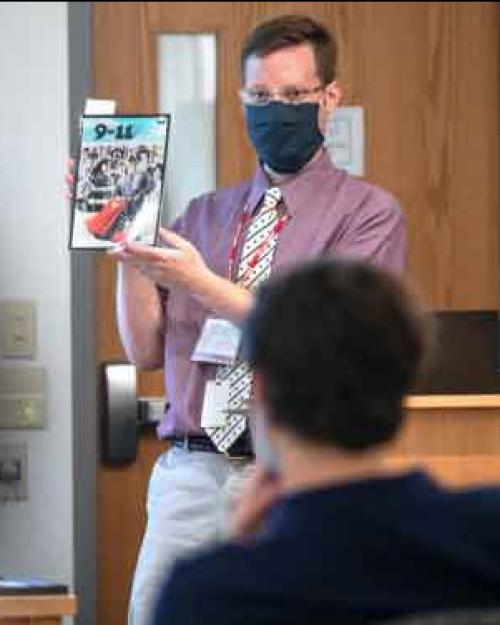 Students viewing the scrapbooks were moved by the campus response to 9/11 – students poured into Willard Straight Hall, the campus store and residence hall lounges to watch the events unfold on TV and thousands of people flooded the Arts Quad for a memorial service – and compared that to their own inability to collectively mourn during COVID-19.

Both of John Colie’s ’23 parents worked in finance in the city in 2001, very near the World Trade Center site. He was 1 month old when the attacks occurred, but he’s mainly read and heard stories about the day through classes at school or commemorative events.

“This will be the first time I’m encountering a very in-depth explanation of what exactly happened,” said Colie, who is studying English and history. “Studying this time contributes to my understanding, but it also inspires certain emotions or reactions that I didn’t realize that I harbor.”

Leynse was also a bit taken aback when she learned of the focus of the seminar –  both her parents also work in the city and she lives near the World Trade Center site.

“It’s something I’ve heard about my whole life and I was hesitant about the heavy emotions that come with this topic,” she said, “but while that was difficult to deal with, I know it’s important to learn about this time.”

The attacks actually occurred shortly after Kammen’s class began in 2001, on a day when their guest speaker was President Emeritus Hunter R. Rawlings III. Earle explained this was before the era of smartphone notifications, so students didn’t hear the news until class was over, and some didn’t hear it until much later, as the university made a decision to continue with classes for the rest of the day 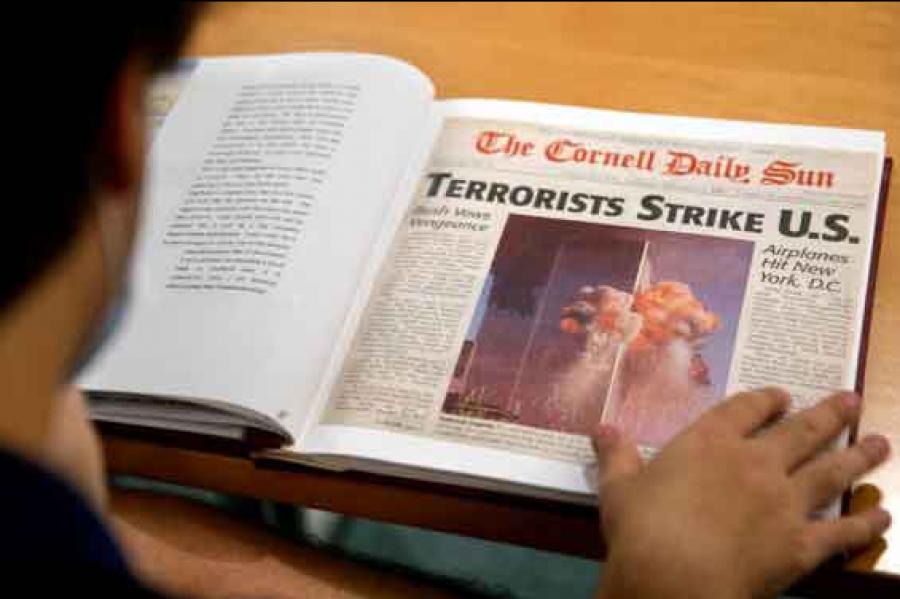 A student looks at the cover of the Cornell Daily Sun from Sept. 12, 2001, at Kroch Library.

During the class, students will examine:

At one point, Ghosh imagined she would be able to take her class to New York City to view the memorials, but the surge in the pandemic made that impossible.

“My plan is to teach this class for five years in a row until we reach the 25th anniversary, and along the way, build a digital archive of material,” Ghosh said, adding that she hopes that archive will become part of the Cornell Public History Initiative.

The scrapbooks are an invaluable part of the university’s archives, Earle said, encouraging current students to undertake a similar project to document their lives during the COVID-19 pandemic.

“You are living through incredible times and this time period needs to be documented,” Earle said. “I would welcome your help in documenting that.”

Leynse appreciated the invitation, saying she has considered it.

“To think that we’re living through this big moment in history, not just because of COVID but also politically and socially, there’s been so much happening this past year,” she said. “I’m just trying to have a college experience and sometimes it’s hard to process that.”