Although climate change has become an increasingly prominent and important issue, finding ways to persuade people about the catastrophic dangers of further environmental degradation has proven to be challenging.

“I think communication is the biggest challenge for action on climate change,” Levine said. “The science is clear, and there’s strong consensus among scientists about the coming dangers. But now it’s crucial to persuade people to take seriously a set of catastrophes that haven’t happened yet.

“Studies show that people are more likely to respond after disasters have come close to home, and by that time it will be too late,” she said.  “But too much fear-mongering, and people stop listening too. So: what kinds of communication will prompt large-scale action to prevent the worst disasters from happening?”

Levine’s idea for the class stemmed from some of her past research on the ways that different forms of media are used to represent and understand climate change.

“I wanted to use that research as a jumping off point for a writing class, prompting students to think not just about good sentences, but about which forms are best for which arguments. So, for example, charts are great for showing large-scale patterns over time, but they’re not good at helping us to think about what it might be like to live through environmental devastation—for that we need stories.”

For one project, students in the class wrote op-ed’s about climate change, some of which were published in their local newspapers.

Kiki Lo ‘22  wrote an op-ed published in the San Mateo Daily Journal about how the fashion industry is one of the biggest polluters due to the quantity of water, energy and resources needed to produce clothes. She discussed how textiles pollute bodies of water because dyes are not properly disposed of, and most clothes end up in landfills. She suggested two main solutions to the problem: turning old items into items of higher value, such as turning five old t-shirts into a dress, orpurchasing from companies that reuse old fabrics.

Several of the students also wrote scripts about aspects of climate change as class projects. The scripts were then sent to students in a visual effects class at Towson University taught by  Lynn Tomlinson ‘88, assistant professor of electronic media and film, who produced animated videos for the scripts as part of their final projects. These “explainer videos” are short films using animation and motion graphics that explain complicated ideas.

Levine and Tomlinson, friends for many years, came up with the idea for the collaboration in October when  Tomlinson came to Cornell to screen her new animated film “The Elephant’s Song” at Cornell Cinema.

“We thought it would be an interesting collaboration for her students to write scripts and share them with my students,” Tomlinson said.  “My students could choose one of the Cornell students' scripts, record it as a voice-over narration and create imagery through motion graphics and animation to  make a complete short film.”

Lo wrote one of the scripts ,about the negative consequences of rapidly increasing carbon dioxide levels on marine life as ocean water is becoming more acidic.

“I realized how hard it is to communicate such a broad issue to an audience with ranging levels of education, “ she said. “Often, the science is difficult to communicate because it is too technical and sometimes causes people to lose interest.

“I think the arts can be used to portray the physical effects of climate change on our planet in order to get at people's emotions, but I think they are less effective at conveying the science and facts behind climate change.”

Levine said the  arts can be a uniquely powerful medium for communicating important issues like climate change.

“[The arts] can help us to imagine the future,” she said. “Fact-based forms have to describe the world as it is, but fiction can help us to think about the world to come—both the best possibilities and the most frightening. The arts can also unsettle our usual habits, including the carbon-intensive patterns of everyday life that we’re used to; they can push us to stop and think rather than just keep going as we have been.

“In my course, students ended up agreeing that we will need all of these different forms together to address a problem as huge and complex as climate change. They experimented with writing in different forms and then I encouraged them to invent their own forms.” 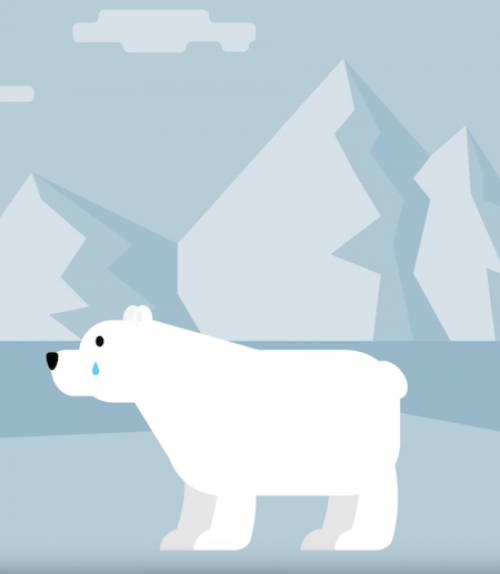