When Kazem Nadjariun was a child, he fell in love with a lake where he spent time with his family in northern Iran. After immigrating as an adult to Germany, it was thirty years before he returned to his beloved lake. But he found it overcome with litter. He began picking up the trash, and went on to create a national network of Iranian “Nature Cleaners.”

Why did Kazem Nadjariun pick up that first piece of garbage and devote his senior years to Nature Cleaners? Environmental sociologist Rich Stedman would explain Nadjariun’s stewardship as “topophilia,” love of place – love of that lake in northern Iran.

My colleagues Zahra Golshani and Karim-Aly Kassam and I have written about Kazem Nadjariun in our books on civic ecology. But his isn’t the only story we have told.

Bobby Hughes has lots of loves in his life. He married his high school sweetheart and they adopted a special needs child. He helps care for children and their parents who are getting their lives back together. Bobby also loves the place he’s lived his whole life—the anthracite coal mining region of Pennsylvania. He doesn’t just love the hills and forests that I see when driving through the area. He also loves the abandoned coal mines and the perpetual mine fires and  orange streams they have left behind, all places he explored as a child.

Bobby founded and has spent the last twenty years leading the Eastern Pennsylvania Coalition for Abandoned Coal Mine Reclamation. He engages his community in cleaning up polluted streams flowing out of the mines and the trash dumped in the mining pits. I think Bobby is motivated by love for the place he grew up in and love for the people he grew up with.

While editing the book “Grassroots to Global,” which explores why these local civic ecology practices matter, I worked with Jill Wrigley and her husband Michael Sarbanes.  Like Bobby, Jill and Michael demonstrated love in their family life—they adopted three children. Although middle class professionals, they chose to live in a low income Baltimore neighborhood where murders and drugs are not uncommon. They demonstrated their love for this community by purchasing a house at the end of a city block and next to an open space along a stream. And they opened up their property to neighborhood children just wanting to explore nature, to anxious moms needing a temporary respite, and to young men recovering from time in prison. Jill and Michael also helped transform a neglected vacant lot into a Peace Park, to commemorate lives lost to neighborhood violence.

I’m an academic and I am not always so comfortable with the word love. We use other terms like biophilia—which means love of life—or topophilia, love of place—to talk about what motivates people to care for Earth’s creatures and its places. We use the term “sense of community” to describe the human need for belonging and mattering to others. But I am not sure any of these terms capture why civic ecology stewards like the ones I’ve described do what they do.

But I have an idea. In answering the question about why people devote their lives to stewarding nature and community, maybe we need to heed the words of Aristotle. He claimed that in order to be happy, we need a kind of love called philia, which is "wanting for someone (else) what one thinks (is) good, for (the other person’s) sake and not for one's own, and being inclined… to do such things for (the other person)." In other words, Kazem, Bobby, Jill and Michael have all discovered that doing things for others, in their neighborhood and in nature, is the form of love that brings happiness. 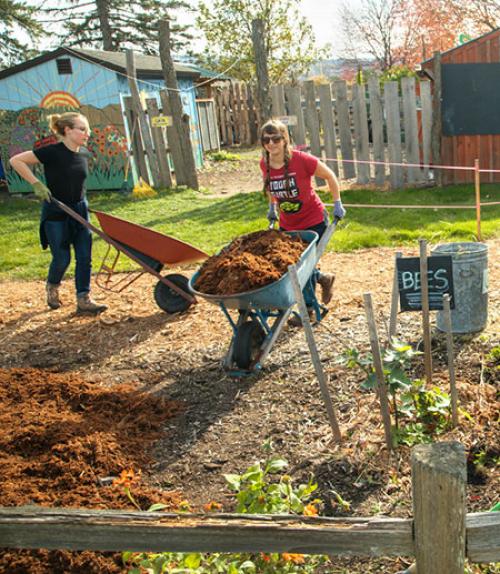