My work focuses on how natural feedbacks in the earth system interact with human activities to produce the world we live in.  So many of our activities modify the environment, including burning fossils fuels, which emits carbon dioxide, the primary cause of climate change, and air pollutants, which cause harm to human health. But we are also modifying the land: over 30% of the land is highly managed by humans.

Currently half the carbon dioxide we emit is taken up by the land and the ocean: the question is, will that continue in the future?

In the oceans, there is a chemical equilibrium between the atmospheric carbon dioxide and the ocean carbon dioxide. The ocean can hold a lot of carbon.  But the ocean mixes very slowly, and as it’s warmed by the higher carbon dioxide in the atmosphere, it slows down its overturning under more climate change.  This slowing down not only reduces the pace that carbon dioxide mixes into the ocean; it also slows down the biological activity in the ocean.  This biological activity supports the productivity of the ocean, which our fisheries need, and it requires new nutrients, most of which come from upwelling from deep ocean reservoirs of nutrients. But it also can come from rivers or from atmospheric deposition.

Atmospheric deposition happens when particles containing nitrogen, metals, and other pollutants fall onto the ground or into water. Humans are not only emitting carbon dioxide into the atmosphere, but we are emitting many air pollutants as well. Many of these are aerosols.  Aerosols are solids or liquids suspended in the atmosphere, like sulfate aerosols or black soot particles from combustion.  But aerosols can also be from natural sources, like sea salts from ocean spray or desert dust from desert regions.  Humans have substantially increased the amount of aerosols in the atmosphere, which has degraded air quality.  For example, in China and India, there is so much pollution people have to wear surgical masks to try to save their lungs from damage.  So these aerosols are terrible for human health and badly impact plants and animals as well.  But it turns out for the climate these aerosols are actually, in total, good, because they are cooling the climate.  Not enough to balance out the carbon dioxide, but they are making the planet less warm. They do this by scattering back some of the sunlight and by modifying clouds to scatter back more sunlight.

Aerosols are very diverse in composition, but some aerosols contain a lot of nitrogen, which fertilizes temperate forests, for example near here in Ithaca, and have caused the forests to grow a little bit more, and store more carbon.  In addition, desert dust aerosols from arid regions with strong winds, for example in North Africa, contain a little bit of iron in them.  Large parts of the open ocean do not have much iron, and the biota there are unable to grow because of the lack of iron.  Thus the deposition of desert dust aerosols can lead to enhanced ocean biota growth and thus an increase in carbon uptake. There are many possible interactions between aerosols and the land and ocean ecosystems, but overall it appears that the anthropogenic aerosols tend to enhance the uptake of carbon dioxide in land and ocean ecosystems, and so decrease atmospheric carbon dioxide.  As we clean up aerosols (as we should, because of the overwhelming harm to humans from them), we will cause climate change to get worse, both because we will directly warm the climate by removing aerosols, and because we will increase carbon dioxide levels.

My research explores some of these unintended consequences of human activities, which interact with natural feedbacks in ways that we are only beginning to understand. 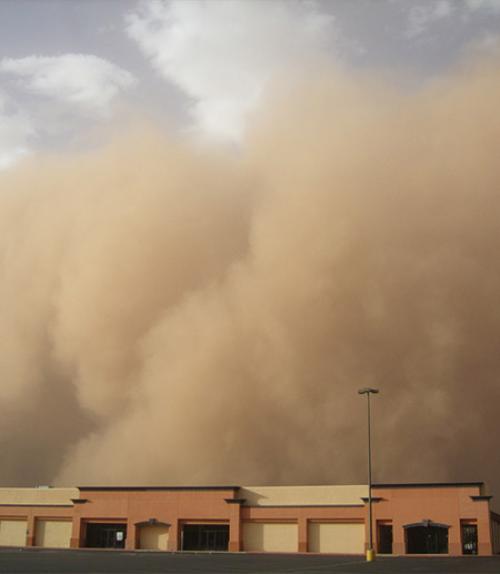