Across Cornell’s diverse student population, many individuals have expressed how race influences the way Cornellians make friends, socialize and affiliate on campus.

A new two-credit Learning Where You Live (LWYL) course this semester on West Campus, ENGL 1605: North/West Campus Dialogue on Race, addresses that and “gives students the opportunity to learn from and with each other about issues of racial conflict … in an atmosphere of openness, mutual engagement and respect,” the course description reads.

Samuels said she and Majka first developed similar initiatives as founding house dean and assistant dean, respectively, at Flora Rose House. “The ideas that we shared back then are certainly reflected in the course Jen has developed to attract students across campus, to engage them in contemplation and in finding the resources necessary for diversity and inclusion at Cornell,” Samuels said.

Their course proposal received funding through an Engaged Learning Where You Live grant. As the class’s community partner, the Multicultural Resource Center in Ithaca brought its Talking Circles on Race and Racism program to campus. Two facilitators engaged with students over six weeks on topics of social justice, historical legacies of race and racism, exploring forms of injustice (individual to systemic), and intersectionality and racial identity – as well as “what it means to be an agent for social change and empowering students to take action,” Majka said.

The second half of the course is focused on projects such as volunteer work in the Ithaca community, engaging with student and campus groups, a short film addressing race and racism on campus, and creative work such as a zine, poetry or art.

In the second class of the semester, students learned about the LARA Method (Listen, Affirm, Respond and Add Information), a communication tool used in the Intergroup Dialogue Project to help create shared understanding.

“Given the frequency and severity of bias incidents on campus, this semester in particular, the students have expressed appreciation for a space to dialogue about and process their thoughts and feelings around the current campus climate,” said Majka, who co-created Race, Class, and Gender Amongst CU Students with history professor Edward Baptist, a LWYL seminar supported by a Toward New Destinations grant in fall 2014 following the release of campus climate survey results that spring.

Both the Intergroup Dialogue Project and the new course “are attempting to build and strengthen capacity for social justice on campus,” she said. “I would advocate for more experiential, high-impact, transformative courses and informal learning opportunities where students have the space to meaningfully engage across difference – the educational benefits of diversity are enhanced through these types of intentional opportunities.”

The class of 20 includes first-year and upperclass students and one graduate student. “My perspective on the reality of what students go through at Cornell was shifted,” said Jonvi Rollins ’20. “Hearing my classmates tell stories surrounding their own marginalization made me realize that the threats of racism, sexism and so on are subtly thriving on campus. Being able to talk about our stories allows us to find common ground … and think about how to take action.”

Another student who requested anonymity said her participation in the dialogue course “has been one of the most humbling experiences of my life. I understand it would be an uncomfortable experience for many. That said, I encourage everyone to participate … these uncomfortable conversations will enlighten you and help you gain the insight to help those who are forced to feel uncomfortable every day by systematic oppression and racism.”

Two engaged learning courses will be offered in the spring on West and North Campus. The two-credit course Culinary Encounters of the “Other” Kind: Americans Encountering Race, Culture and Community Through Food explores how food and cooking inform social categories such as gender, race, family and class, and “racial and cultural otherness.” Group discussions, tastings and hands-on food preparation culminate in a community dinner.

The one-credit course Seeing Science in Action highlights science as a creative and collaborative process of discovery – faculty members visit to talk about their research, then students shadow postdocs and grad students and read a paper from each lab. Public policy and careers in scientific research also are covered in the course, taught by professor of biomedical engineering and Donlon Hall faculty-in-residence Chris Schaffer, who initiated it in 2014.

“What these Engaged LWYL courses add are explicit and intentional connections to various communities outside of campus,” said Ethan Stephenson, director of faculty living-learning programs in the Office of the Vice Provost for Undergraduate Education.

“Students benefit from learning about and engaging with these communities, whether through a talking circle with the Multicultural Resource Center, a dialogue with Ithacans involved in the local food scene or a Skype meeting with scientists engaged in informing public policy,” he said. “In each of these cases, these courses allow for students to see the interplay between theory and practice, something that I think further enriches the student experience. Our hope is that students who take one of these courses will take more engaged courses at Cornell.” 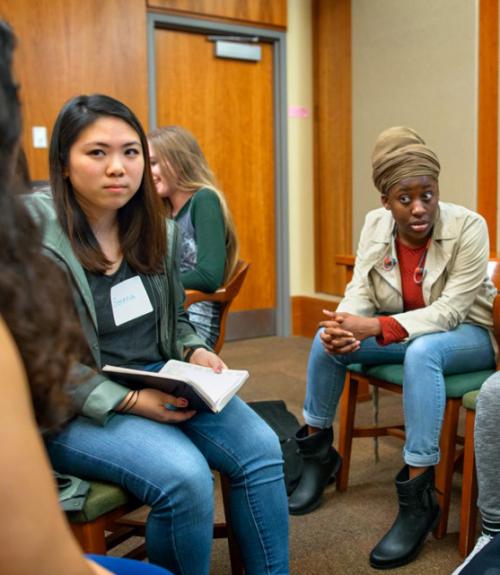