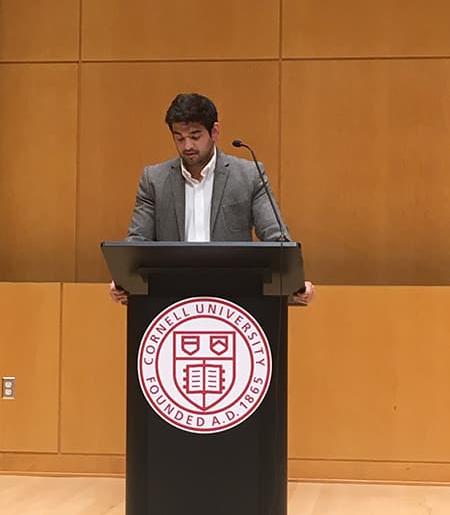 Christopher Seiji Berardino is a Ph.D. candidate in English Literature at Cornell University. His dissertation, Multitude Modernism: “Democratic Epiphany” in Interwar American Literature theorizes the existence of a modern multiethnic tradition in American literature of the 1930s and 40s. Exploring the works of Richard Wright, H.T. Tsiang, Muriel Rukeyser, and John Steinbeck, Berardino’s study analyzes instants wherein an individual is depicted as “melting” and “melding” with their surrounding social environment. The dissertation categorizes these surrealistic moments as “democratic epiphanies.” This technique not only articulates a collectivist form of modernism, but creates a vibrant, inclusive, and radical literary movement hereto unrecognized. His chapter on John Steinbeck is forthcoming in the Steinbeck Review.

In addition to his scholarship, Christopher Seiji Berardino is also a creative writer of Japanese-American descent from Orange County, CA. He received an MFA in Fiction from Cornell University in 2018. He has completed his first novel, Infamy, about the oft-forgotten Japanese Internment Camps. His collection of short fiction, Internment Stories: An Inheritance in Pieces was named as a finalist for the Hudson Prize in Fiction. His work has previously appeared in Flash Fiction, The Copperfield Review, Every Writer’s Resource, Pilgrimage, Newfound, The Pinch, and others.